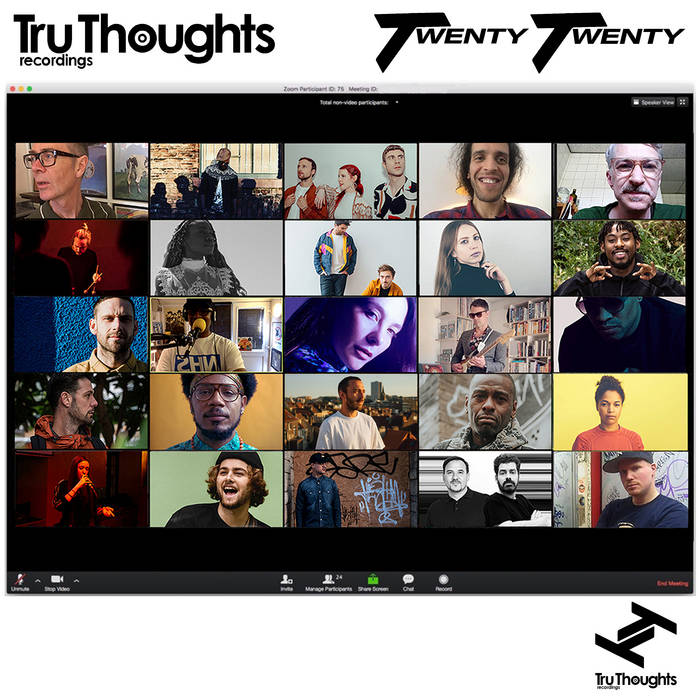 As 2020 draws to a close, we present ‘Tru Thoughts 2020’, the latest edition of our annual compilation series. Curated by A&R and founder Robert Luis, the digital album celebrates the best of the wide-ranging and international releases from this year. Featuring the finest of Tru Thoughts’ classic artists, new signings and inspired remixes, this compilation highlights a diverse selection of sounds, from neo-soul and electronica through to grime, jazz, broken beat, drum and bass and leftfield dance music.

“In an unusual year for everyone with everything going on in the world, it has been nice for us to see at the label that releases this year have been particularly well received; a sign we hope that lots of people are using music to help through these times. As we always like to do at Tru Thoughts, we have released music from new artists at the start of their music journey such as Tiawa and Crafty 893 alongside more established artists who continue to be creative. This end of year round up covers a lot of music genres from Soul and Broken Beat to Jazz, Grime, Bass and many more, featuring artists and influences from across the world.”
– Robert Luis (Tru Thoughts A&R and co-owner)

In a year that began with sold out live dates for LA-trio Moonchild and New Orleans’ Grammy-nominated Hot 8 Brass Brand – who once again sold out the Brighton Dome before taking to the stage at the BBC 6Music Festival – we highlight the artists who got creative with their album campaigns this year and mastered the art of the lockdown session. Sly5thAve (who performed as part of The Roots Solo Sessions and We Out Here Festival) opens the compilation with “With You feat. Denitia” taken from the highly acclaimed ‘What It Is’. Meanwhile, France-via-Brussels duo Nikitch & Kuna Maze (who appeared at EFG London Jazz Festival) present “Francis’ Theme” taken from their debut album ‘Debuts’.

2020 has been an exciting time for new signings on Tru Thoughts, with the likes of South London Grime artist and MC Crafty 893, DJ, producer and illustrator Fybe:One, and iconic house act Soul Central all joining the label roster. After her performance at our 20th birthday party last year, we’re excited to present “Life Is Not A Crime”, the debut single from Brightonian singer-songwriter and MC Tiawa alongside “Relight feat. Laura Roy & Woddy Green”, the Tru Thoughts debut for 21-year-old producer and multi-instrumentalist Hemai. Stepping further afield with the latest additions to the roster, the magical collaboration of Moroccan Gnawa-master Rabii Harnoune and Frankfurt electronic producer V.B.Kühl showcase a melange of traditional North African Gnawa music and modern club sounds on “Traveller”; while Berlin-based Italian-born sUb_modU offers up “Expensive Shit”.

Returning to the label’s club roots, ‘Tru Thoughts 2020’ features a selection of the experimental and innovative remixes released this year. Renowned broken beat innovator dego reworks Bryony Jarman-Pinto’s “Sour Face”, bruk grooves bounce between bass and funk as Nuff Pedals presents his take on Rhi’s “How Deep”. UK producer Ben Hauke transports The Seshen from the West Coast to South London on “Still Dreaming (Ben Hauke Remix)” while J.Sparrow takes us back to a summer of festivals, giving Flowdan’s “Welcome To London” a facelift. Sitting alongside these diverse gems having been re-released for Record Store Day is DJ Jazzy Jeff and James Poyser’s laid back future-jazz remix of Moonchild’s “The Truth”.

A sprinkling of worldwide neo-soul comes from Manchester soul-collective Pieces of a Man’s cover of the late, great Bill Withers’ “Use Me” and Brooklyn-based band Space Captain’s precognitive “Birthday Cards”. Celebrating his father’s Zimbabwe heritage, rising star WheelUP continues to showcase how he has charmed tastemakers across the board including likes of Mary Anne Hobbs, Toddla T, Bonobo, Emma-Jean Thackray and BEN UFO on “Ndebele” and fellow BBC 6Music favourite J-Felix adds his signature future blend of boogie p-funk, disco and soul to the existential question “Future (Are We Living!?).

Bandcamp Daily  your guide to the world of Bandcamp